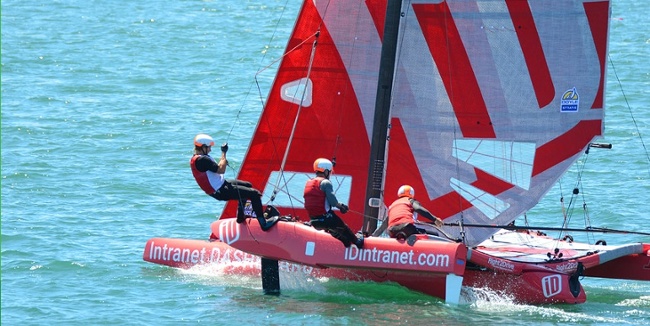 GreenOrbit CEO Stewart Bairstow said, “We are thrilled to be involved in this ground breaking new concept that is set to take the world by storm. It’s also a pleasure to have been involved behind the scenes, with the SuperFoiler team using the GreenOrbit platform to power their digital workplace, facilitating their internal communications, along with our development of the official attendee app.”

“Our association with SuperFoiler was a natural one, given our shared passion and track record for pushing the boundaries with innovative, state of the art technology.”

The GreenOrbit foiler will set sail in the first series of the competition lead by Skipper, Paul Campbell-James; Mainsheet Hand, Ed Powys and Bowman, Jasper “Fang” Warren, on Adelaide’s Outer Harbour. “As a team we are really excited to be part of this series - our foiling background is going to be a huge advantage.”

The series will tour Australia across five locations starting today.

Live coverage will feature on Channel Seven app ‘7Plus’ and a post-production special will be televised following the completion of the series.

Grand Prix Sailing Pty Ltd are the original creators of the Grand Prix 18 foot skiff circuit, popularly televised throughout the 1990’s. The team are back to deliver a global leading sports entertaining platform, focused around a new generation of incredible on-water flying machines.

The team at SuperFoiler use GreenOrbit to manage documents, deliver training and engage their mobile workforce.